Hello Folks,
It’s been a while from my last post. I’ve been busy with work, but in the last few weeks I still managed to put together a measurement.
Some time ago I found myself in a conversation about food, it felt like one of those occasions where people end up taking pictures of what they are eating to later post them in social media, so I wasn’t paying any attention at all. Then someone mentioned “Sale Iposodico”, which should translate in English as Potassium Chloride Salt. I knew nothing about it, by bad.
Basically it’s a substitute for regular salt with less Sodium. Its use is encouraged to reduce Sodium intake and increase Potassium. This is from FDA website (https://www.fda.gov/food/cfsan-constitu ... d-labeling):
“The draft guidance is consistent with FDA's Nutrition Innovation Strategy to reduce the burden of chronic disease in the United States through improved nutrition. The strategy’s goals are to empower consumers with information and support and foster industry innovation in developing and promoting healthful food options. The draft guidance is also consistent with FDA’s activities to encourage manufacturers to reduce the sodium levels in food products in the interest of public health.
Potassium chloride, in some instances, can be used as a partial substitute for sodium chloride in food processing and manufacturing. The addition of the term “salt” to “potassium chloride” may encourage manufacturers to use this sodium alternative and help consumers to understand that potassium chloride can replace sodium chloride in foods. This may help to reduce the intake of sodium, which is over-consumed by the U.S. population, while increasing potassium, which is under-consumed.”

As soon as I arrived home I got my Geiger and I immediately saw the counts going up at contact with the salt, still inside the plastic container.
I decided to take a 20 minutes count in order to quantify the difference.
First, the room’s background, 1122 counts in 20 minutes = 56.1 CPM.

That was a good start and an indication there was actually something to work on. But the geometry wasn’t good at all so I decided to put the salt inside a plastic bag. I repeated the count and this time the result was 5683 counts in 20 minutes = 284.15 CPM. “Now we are talking” I told myself.

But, knowing K40, that must had been mostly beta radiation, and in the end it didn’t tell me that much on the chance of recording a decent gamma spectrum from the sample. So I took my PDS and I repeated the test over a longer period of time, in order to see how much gammas I was getting.

The difference was in the region of 1.20 CPS, which was the equivalent of 2.5% of the background. My 2’’x2’’ NaI(Tl) usually is able to detect 5-6 times as many gammas as the PDS all things being equal, so that was an indication that I could expect some 6-7 CPS. Not much, but still manageable.
The good thing about this early result was that the increase in counts in the K40 region, compared with the background, was very visible in the logarithmic scale and that gave me confidence that a shielded test with background subtraction would indeed allow me to identify the K40 gamma peak.

I couldn’t fit all 300 grams inside my shield’s chamber, so I had to settle for 110 grams

I started with a 4 day background, then 8 days with the sample and another 4 days of background.
The shielding was unchanged from my last measurement: 5 mm of plastic, 1 mm of copper, 8 mm of pewter and 13-15 mm of lead, plus 2 mm to close the “chamber”.
The result was unchanged as well, I managed to reduce the count rate to 59.62 CPS (my unshielded background is 255-260 CPS).

During the measurement I realized I could have done a slightly better job as far as the geometry was concerned, but I didn’t want to change the boundary conditions while the test was in progress, so I decided to take it to the end and then repeat it some time in the future. K40 has a half-life time of 1.25 billion years, so I guess there’s no need to hurry too much.
The result was better than expected, the K40 peak at 1460 keV is loud and clear, also well visible are the Compton edge and the backscatter peak. It took me a while to figure it out the latter, because you initially tend to overlook that option, but it later emerged as the most likely explanation.
There’s then the annihilation peak at 511 keV and that was it as far as what I expected to find, but, as you can see, there’s more.
I identified a clear peak around 63 keV and another one around 92 keV. Thorium 234? Well, it looked like that, but it doesn’t make sense to me, so for now I left those peaks unlabeled waiting for further results. Before repeating the test I will also search for results from similar measurements for “inspiration”.

Unfortunately in the middle of the test the ambient temperature went down by several degrees and that caused a thermal drift quite visible at high energies, the K40’s peak is around 1485 keV instead of 1460 keV, but a part from that I was happy with the result.

Given the expected daily consumption, there’s no reason to think that the radiation from this particular salt could pose a health risk. Some more info here http://large.stanford.edu/courses/2015/ph241/gilpin1/

Finally, here’s the quantitative analysis. In the end 9.76 CPS from the sample was pretty close to what I expected and luckily it was enough for a decent gamme spectrum.

That’s all for today, until next time

Massimo
Kcl salt may be a good alternative to Nacl
However taking according to bodily requirements is essential.
Patients on certain medications or kidney diseases should best avoid
I have scanned hospital base Kcl
Also some K nitrate fertilizer
Both show prominent k40 peaks
I am not sure if there were any peaks on left..din do a thorough check
FYI some rock salt mines contain radioactive residue like the major one in Pakistan
Brine from seawater pollution may be radioactive as well
Even the porcelain cup use at home is mildly radioactive
Thanks for yr check and will study in more detail

Massimo
Kcl salt may be a good alternative to Nacl
Western diet is probably rich with NaCl
However taking according to bodily requirements is essential.
Patients on certain medications or kidney diseases should best avoid
I have scanned hospital base Kcl
Also some K nitrate fertilizer
Both show prominent k40 peaks
I am not sure if there were any peaks on left..din do a thorough check
FYI some rock salt mines contain radioactive residue like the major one in Pakistan
Brine from seawater pollution may be radioactive as well
Even the porcelain cup use at home is mildly radioactive
Thanks for yr check and will study in more detail

Yes, "dietary salt" gives a nice K40 peak. Keep in mind that it's not 100% KCl but usually somewhere in between 1/2 and 2/3, the rest is sodium chloride, magnesium carbonates and other stuff. Thus, potassium content is from 25% to 35% by weight. Pure laboratory KCl in contrast would be around 50% potassium by weight and should give even better K40 peaks (and it's cheap and easy to obtain).

It's even more fun with potassium-bearing minerals and rocks, although they would never contain as much potassium as pure KCl. I've found feldspars (most of them) to contain enough potassium to give rather noticeable K40 peaks. If you happen to visit one of those small minerals/gems stores, look for ortoclase (looks crystaline, from transparent to semi-transparent, comes in various colors - from no color to white-ish to pink to yellow to blue, depending on "impurities"). Another one is amazonite which has the same chemical composition, but looks somewhat amorphic with a distinct (and I think beautiful) green-ish color. They should contain about 15% potassium by weight, so it would have about 1/2 the K40 activity of the same amount of "potassium salt", yet very easy to register.

Feldspars are among the most abundant minerals on earth (if not the most). Not all are potassium feldspars though (there are sodium or even calcium ones). They are common in most igneous rock, yet the potassium content may vary a lot. For example from the granite samples I've collected from a nearby mountain in Bulgaria (Rila), the K40 activity was rather high while the granite samples I've collected from Chalkidiki (Greece) are rather poor in potassium.
Regards,
Milen Rangelov
Top

For what is worth - a few hundred pounds of KCl (sold as Water Softener). Each bag is 40 LB. 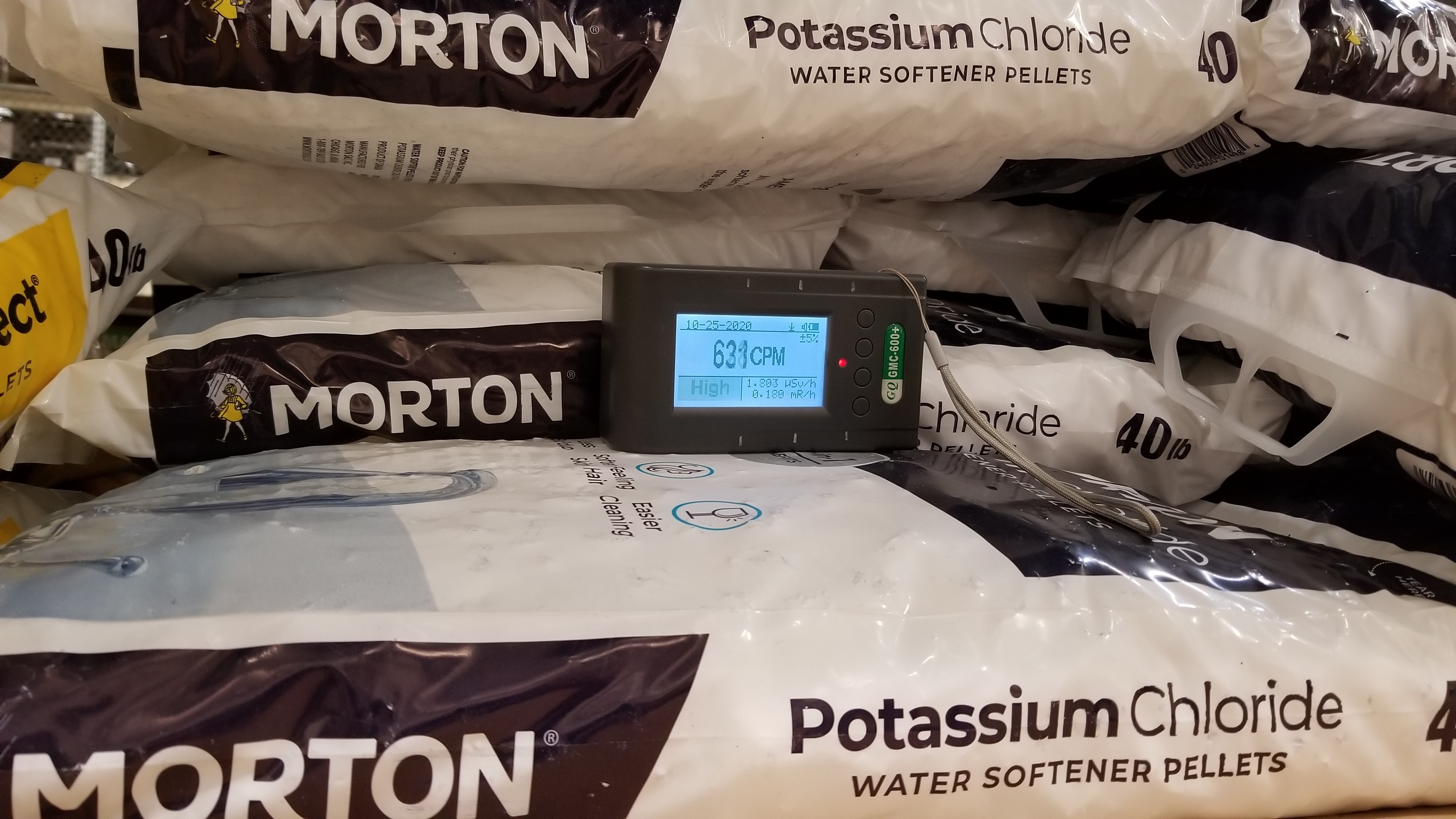 Yes, "dietary salt" gives a nice K40 peak. Keep in mind that it's not 100% KCl but usually somewhere in between 1/2 and 2/3, the rest is sodium chloride, magnesium carbonates and other stuff. Thus, potassium content is from 25% to 35% by weight. Pure laboratory KCl in contrast would be around 50% potassium by weight and should give even better K40 peaks (and it's cheap and easy to obtain).

Yeah, if you look at the first photo this one has 35% of NaCl.


For what is worth - a few hundred pounds of KCl (sold as Water Softener). Each bag is 40 LB.

That's a lot of Potassium! :D Anyway, that would way too much for my shield's chamber, I couldn't even fit 300 grams!

[You may also want to try the kitty litter isle... :)]
I will have to google that!
Top

I use a very pure salt from a pharmacy. 99.9% according to analysis. So I am sure that I really only have potassium in the sample. The spectrum shown was created with this salt. Background was 16.7 CPS, with KCl it was 32.7 CPS.

I swiped about 3 Kg of KCl from my father-in-law's water softener for use as a calibration source. A K40 peak also showed up well in the Terracotta Tile spectrum I posted a few months ago. Apparently it is from "weathered feldspar" in the clay. Sometimes I see it in background spectrums, although generally not in mine.

Potassium is in food, of course. The best indication I have seen is in potato chips; 10 cpm net with a pancake and a scaler, see attached file. I don't think I could get a K40 peak from a spectrum from potato chips with my 38mm probe, but I haven't tried.

A lot of research has been done on interpreting the isotope ratios of the primordial nuclides in meteorites as a way of dating and understanding the formation of the solar system. It is generally well over my head, but interesting anyway.