There are many naturally occurring radioactive minerals in the Earths crust, the primary sources are Uranium and Thorium, these isotopes have a long half life, and it is believed that what we see in nature today, has survived since the formation of the Earth itself. Both Uranium and Thorium decay via many other isotopes before they finally turn into a stable element, which is usually stable Lead Pb. The decay chains are quite complex, but has been well documented in WIKI and many other places.

The following spectrum was recorded by Peter Daley, and is said to be of black mineral sand. This spectrum is very typical of a N.O.R.M., the first peak that really stands out is the 609Bi peak at 609KeV this one is almost always visible, Next are the three gamma peaks from 214Pb, a clear sign that this sample has Uranium in it. 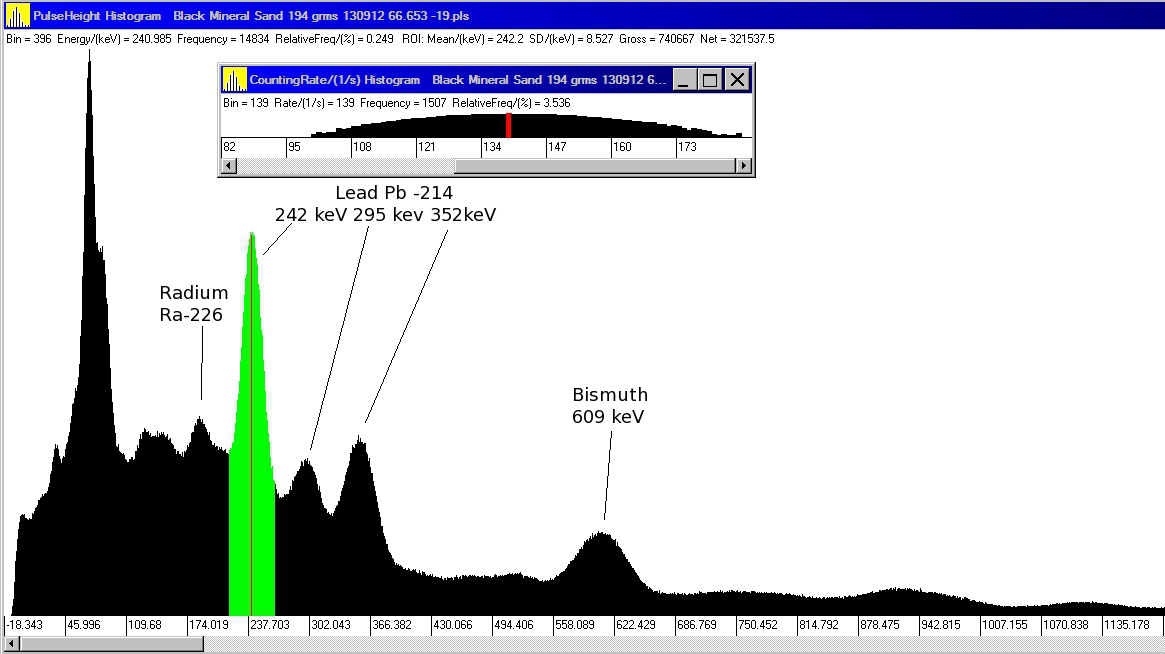 Below is another spectrum tyaken by Peter Daley, this one is from a swab of rainwater. Surpricing to some that rainwater can be radioactive, but there is nothing sinister about this finding. The water dumped by this rain storm was probably lifted from the Pacific ocean which contains traces of Radon, thereby decaying with a pattern similar to Uranium, Radon is of course one of the decay products of Uranium. See Uranium Decay Chain in WIKI

I recently obtained this little piece of polycrase from an eBay seller. It weighs around 27 grams, and it is radioactive, showing around 47,000 counts per minute on a standard geiger counter. Polycrase is a blend of uranium yttrium oxide mineral with formula: (Y,Ca,Ce,U,Th)(Ti,Nb,Ta)2O6. It has a Mohs hardness of 5 to 6 and a specific gravity of 5. First described in 1870 at Rasvag, Hitterø Island, near Flekkefjord, Norway. It is now found in Sweden, Norway, and the United States.

Soon after receiving the mineral sample, I recorded a 200 minute gamma spectrum using the GS-1100A with my Bicron NaI detector, which yielded a good spectrum, here shown in linear scale. 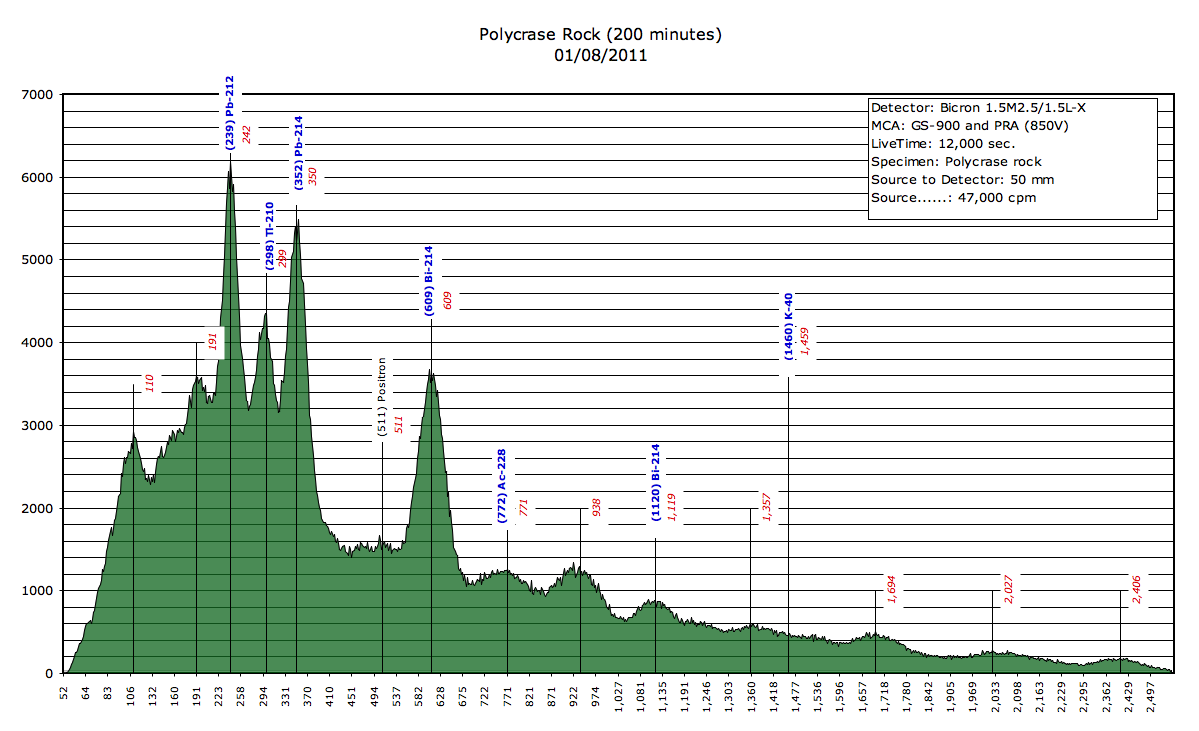 This histogram was created by exporting the data from PRA, then importing it into Excel, for a better presentation.

This excellent Thorium spectrum was recorded by Karl Brehwens, from a lantern mantle, using a 30 x 70 mm NaI scintillation detector with PRA and GS-1100A, most of the photo peaks from the Thorium decay chain are clearly visible, 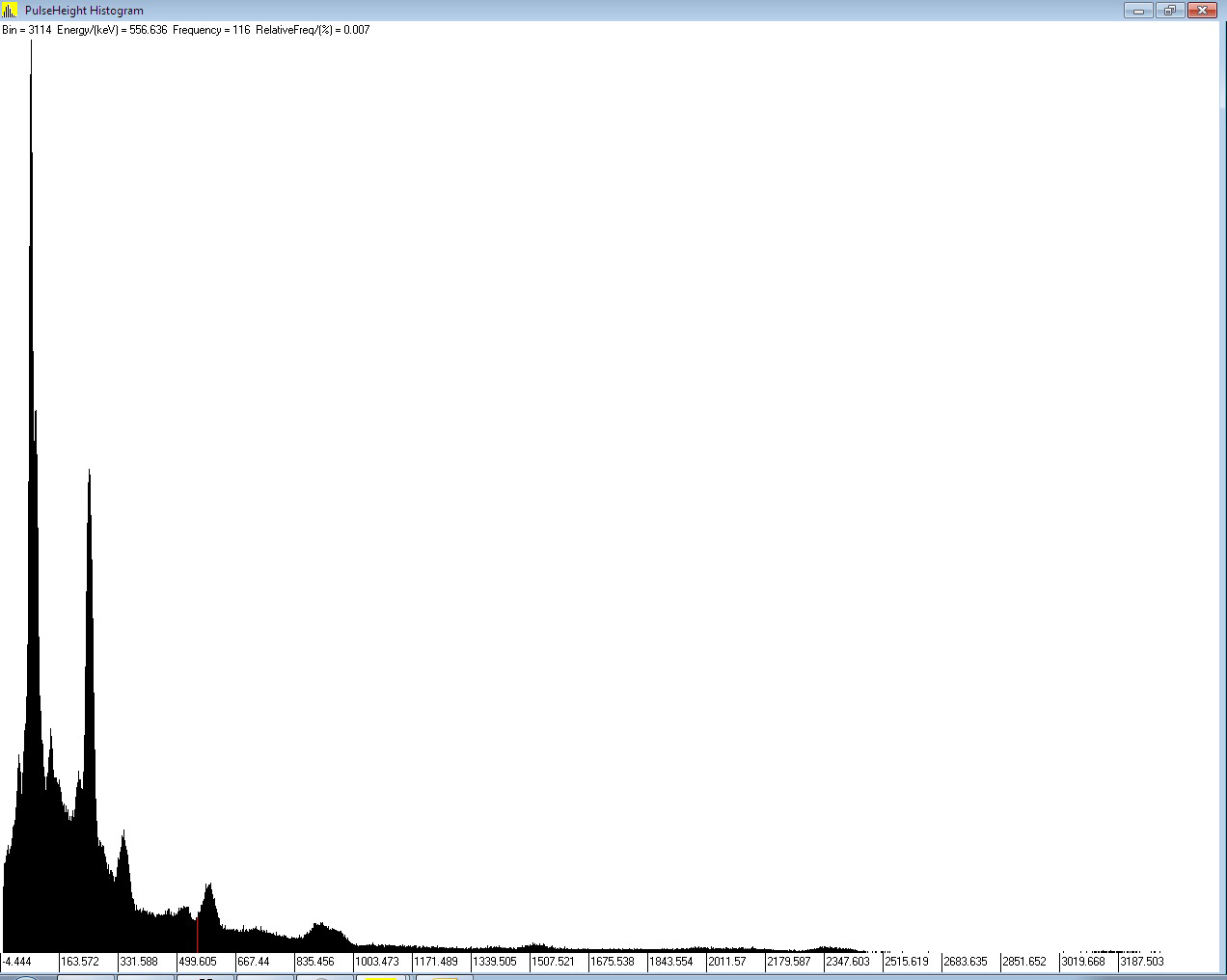 There are no products to list in this category.

We want you to be 100% happy with your Gammaspectacular product, and offer free after sales support to get you up and running.
If you for any reason you require a refund or replacement, please contact us within 30 days of purchase to arrange the return.
Return shipping cost and risk is the sole responsibility of the buyer.
Return shipping address: Bee Research, Po Box 6259, Alexandria, NSW 2020, Australia